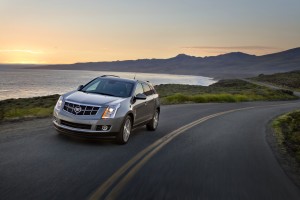 Jim Hudson Cadillac, the exclusive authorized Cadillac dealership in Columbia, South Carolina, is thrilled to announce exciting changes coming to the Cadillac SRX for the 2012 model year, which begins in August. A new 308-horsepower 3.6L direct-injected V6 engine, even more powerful than the optional turbocharged engine available in 2011, gives SRX the most standard power in its class, and includes a driver-selectable ECO Mode for optimal fuel economy.

While gaining 43 horsepower compared to the standard engine in the 2011 SRX, the new engine (code-named LFX) delivers comparable fuel economy to predecessor engines because of its more mass-efficient design and the ECO Mode, which alters the shift points in the 6-speed HydraMatic automatic transmission to maximize economy.  In addition, the outgoing turbocharged engine was only available with all-wheel drive, meaning drivers can now benefit from the additional power without the normal dip in fuel economy that all-wheel drive vehicles encounter.

The 2012 SRX carries a standard price of $36,060 including $875 destination charge. Other upgrades and changes in the SRX for 2012 include standard Bluetooth on all models, an heated steering wheel that comes on all but the base model, a new Xenon Blue Metallic exterior paint option that will be available in fall 2011, an all-ebony interior option with contrasting stitching, and a new 20-inch wheel finish option.

“We’re taking a winning product in the SRX and reaching higher,” said Don Butler, Cadillac VP for marketing. “The crossover category is one of the biggest and most important segments in the luxury market. SRX has performed very well and is the best selling Cadillac worldwide, but our approach is not to leave well enough alone.”

Since the current generation launched for the 2010 model year, SRX sales in the United States have moved from ninth to second in the segment, overtaking nearly all competitors. SRX retail sales are up 18 percent in 2011, gaining 1.5 share points this year. Additionally, 71 percent of SRX buyers are new to Cadillac, a high “conquest” rate in a luxury segment known for buyers that are highly loyal to their chosen brands. 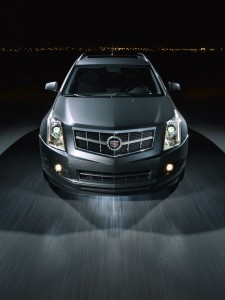 The 2011 Cadillac SRX Crossover is available from Jim Hudson Cadillac in Columbia, SC

The 2011 Cadillac SRX, available exclusively from Jim Hudson Cadillac, offers Columbia, South Carolina car shoppers a dynamic alternative in the mid-luxury crossover segment, with a dramatic design, efficient engine choices and a nimble driving experience. Although the second-generation SRX has only been on the market since 2010 (2009 CY), it has quickly become one of the best-selling vehicles in its segment against competitors such as the Lexus RX and Audi A5 Quattro. The SRX receives several revisions for 2011, with a number of new features and modifications that make the vehicle even more refined, responsive and technologically advanced while offering Columbia’s drivers an even better value.

Customers now have increased access to the features they demand most, with expanded availability of the optional rear-vision camera system and keyless access feature. In addition, the cargo fence is standard on all the collections, allowing customers to leverage the SRX’s rear storage system. There are also two new exterior colors to choose from: Mocha Steel Metallic and the premium Black Ice Metallic.

SRX seats five and delivers generous occupant and cargo room; it can tow up to 3,500 pounds (1,587 kg) when properly equipped. A 3.0L direct injected V-6 engine is standard, though a 2.8L turbocharged V-6 is available in very limited quantities. Both employ advanced technology that helps produce strong performance that is typical of larger-displacement engines, but with greater fuel economy and lower emissions. Front-wheel-drive SRX models with the 3.0L engine are EPA-rated at 25 mpg on the highway.

Performance and safety are enhanced by an available all-wheel-drive (AWD) system designed to optimize vehicle handling and stability in all driving conditions. The pre-emptive, active-on-demand system provides an extra measure of capability in wet or icy conditions.

The SRX’s dynamic exterior features a dramatic diving gesture on the sides to impart the feeling of movement, even when at rest. A multi-piece shield grille and Cadillac’s iconic vertical headlamps – with light pipe technology and available adaptive forward lighting for a striking appearance – are the face of the SRX. They blend into a tightly wrapped, sweeping body that tapers downward at the rear of the vehicle, creating a sporty profile.

The SRX has a wide stance, minimal overhangs and wheels pushed to corners. 18-inch wheels are standard with 20-inch wheels available. A bold accent line dives across the body side and culminates at a chrome front fender vent that incorporates a side marker lamp. An integrated spoiler on the rearward edge of the roof extends the sleek lines and improves aerodynamics for better performance and fuel economy.

An integrated center stack houses controls for climate and audio systems, while the available navigation system rises from the center of the instrument panel. A signature example of the SRX’s attention to detail is the Cadillac script logos in the front door sill plates that illuminate when the doors are opened.

Advanced Technology and Entertainment System in the 2011 Cadillac SRX

Bluetooth compatibility is standard, as is one year of OnStar’s Turn-by-Turn Navigation service for buyers who do not select the navigation system option.

For 2011, the SRX offers Columbia’s drivers the ninth generation of OnStar technology. The flexible speech recognition system is now smart enough to interpret different sentences/phrases without actually hearing the exact 2-3 word commands from the user. For example, a subscriber who wants to place a call using the Hands Free Calling System simply says: “I would like to make a phone call” or “Need to make a phone call” instead of saying the exact “dial” or “call” command as in past systems. The system will understand that the user wants to place a call and process that command. The system is capable of recognizing thousands of sentences that users may say.

Additionally, significant improvements have been made to OnStar’s flexible speech recognition system to allow it to better understand many regional dialects. This means that no matter your accent, your SRX will be able to understand your commands better. OnStar engineers in North America and China performed extensive validation testing across four languages (English, French, Spanish and Mandarin), more than 30 different dialects and vehicle models in a wide range of driving and noise conditions.

The SRX is powered by a standard direct injected 3.0L V-6 that delivers 265 horsepower (198 kW) and has a six-speed automatic transmission. Direct injection results in more power, better fuel economy and lower emissions, all with a smaller-displacement package. The 3.0L engine uses variable valve timing to optimize power and fuel efficiency and reduce emissions. It is paired with a Hydra-Matic 6T70 six-speed automatic transmission with manual shift control. For 2011, powertrain calibrations have been altered on the SRX to improve acceleration feel.

The driving experience of the SRX blends the best elements of a sports sedan with the safety and excellent traction capability that crossover and SUV buyers value. One of its core elements is its advanced AWD system, featuring an electronic limited-slip differential (eLSD.) The eLSD enables the system to distribute torque from the front to rear axle, and also side-to-side, across the rear axle. Developed in partnership with Haldex, a leader in all-wheel-drive technology, the system provides torque to the wheel with the most traction.
The advanced AWD system provides excellent traction in slippery conditions such as rain, snow or ice. In all conditions, the system bolsters other driving dynamics, such as cornering. The suspension includes an available, continuously variable real-time damping system in conjunction with AWD that delivers smooth ride quality by adjusting shock damping rates in response to road conditions. 18-inch wheels are standard, and 20-inch wheels are optional.

The SRX features standard rack-and-pinion hydraulic steering and an available variable effort, speed-sensitive steering system with tuning biased for sport sedan-style driving and strong on-center feel. StabiliTrak electronic stability control is standard, which compares the actual dynamics of the SRX with the inputs from the steering wheel and pedals, then adjusts braking on each of the wheels to keep you on track.

The 2011 Cadillac SRX is designed to protect occupants before, during and after a crash. A strong body structure and chassis that absorb crash energy are complemented by martensitic steel in the fully enclosed rocker sections. Martensitic steel is one of the strongest available and its use in the rockers helps protect Columbia’s drivers and passengers against intrusion during a side-impact crash while also helping maintain the structure during front and rear crashes.

Additional safety features include standard head curtain side air bags, standard front seat-mounted pelvic/thorax side air bags, front safety belts with dual pretensioners and load limiters, rollover mitigation sensors, trailer stability assist and OnStar, which can notify local emergency services of your exact location in an accident even if you are unable to answer their call to the vehicle.

The SRX was also designed to meet European standards for protecting pedestrians in an impact; and the front bumper is positioned for greater compatibility with car bumpers.

Jim Hudson Cadillac is the exclusive Columbia Cadillac dealer, serving the entire midlands of South Carolina.  Jim Hudson has carried the Cadillac SRX since it became an authorized Cadillac dealer in May 2010 following 30 years of exceptional customer service to the area’s Oldsmobile, Buick, Pontiac, and GMC drivers.  Readers of The State have voted Jim Hudson Best New Car Dealership in Columbia an unmatched ten years in a row, a testament to Jim Hudson’s commitment to complete customer satisfaction.  For more information on the 2011 Cadillac SRX in Columbia, SC, call Jim Hudson at (803) 783-0110 or visit Jim Hudson Cadillac at 7201 Garners Ferry Road in Columbia, SC. END_OF_DOCUMENT_TOKEN_TO_BE_REPLACED

Other used Cadillac cars for sale in Columbia SC